As promised, this week’s patch is a combat patch that contains a new wave of combat and siege related tweaks. With this update we have added changes to stamina, wounds, bleeding and fracture calculation mechanics, as well as some slashing damage tweaks. We would like you to try the combat patch out, see how the new tweaks work for you in the battle and would be grateful for your feedback. Once players start experiencing and testing the new combat mechanics in the patch, we are planning to organize an AMA dedicated to combat systems, so it’s a good idea to start making notes and sending us your feedback. Looking forward to hearing from you!

This patch contains some other tweaks and a bunch of fixes and optimizations, including Trade Post delivery fixes, a bug where the experience bar would not fill up, and many others. Check the patch notes for the full list of tweaks and fixes.

Last Saturday a player-organized event ‘Feudalists and Peasants meetings’ took place in the Green Zone of Godenland. The event went pretty well, the Clergy guild managed to gather about 30 feudalists across Abella. The guests were welcome to trade on Market, join the job fair, and gather for political discussions. The last activity was the wedding, where brave knights had to fight for the bride. If you’ve missed the event, here is the recording of the steam, check the time codes if you want to see the wedding challenge and ceremony (the commentary is primarily in Russian):

If you’re interested in visiting or organizing player-run RP events, hit up the LiF Team on our official Discord, we would be happy to support your initiative! And if you happen to be a streamer and a content maker who is willing to be featured on our LiF:MMO official Steam Broadcasts page, message Elizabeth (Laskin)#7217 with your channel link, and we will work something out!

In other news, today we are introducing some brand new Heavy Crossbow Skins in the Premium Store. There are three exquisite options from you to choose from:

Templar Crossbow — covered in scales of red lacquer depicting a temple's stained-glass window. The body of the crossbow is made of wood, but reinforced with thin layers of tempered blued steel;

Sleeping Guard — a unique weapon decorated with an ancient Sleeping Guard crossbow, for those willing to be vigilant and never miss;

Cavalier Crossbow — a one-of-a-kind weapon embossed with runic designs. The butt is decorated with a boar's head, the symbol of Jarl Dolwig the Dappled, who once reigned in
the Northeast.

Which one suits best for you? Hurry to the store, all three are available at a discount to celebrate their debut! 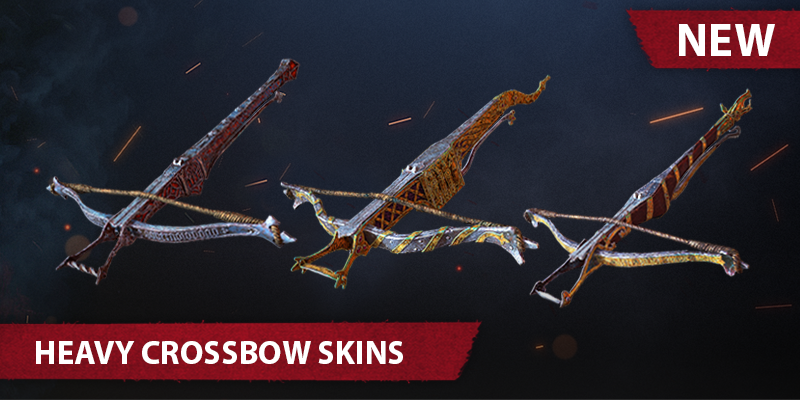 That’s it for today, feudalists!
Have a great weekend!