This week we have released a patch with a bunch of important bug fixes and some tweaks based on your feedback.


As many of you are well aware - we had a spur of the moment PvP AMA in our Discord a week ago about “barkboxing” into enemy castles outside of JH. The result of this AMA was a poll that was running for an about the week.
“Do you want to change the rules on the Godenland in a way, that you and other players will BE ABLE to drop movable objects (bark boxes for instance) on an enemy fief OUTSIDE of JH hours in order to get over walls and raid?”
With over 5000 votes cast we have the following results:
Yes - 42.4%
No - 57.6%

We agree with the majority that it is good to have relative safety inside the perimeter of your walls outside of JH. We have also not forgotten the PVP hungry players and have a sweet treat for them too - new siege ladders should make it possible to get over palisade and stone walls EVEN if they’re placed on top of a heavily terraformed slope! That means that during JH almost all types of fortifications will be vulnerable to assaults using these siege ladders and the brave warriors that use them to get in and wreak havoc!

This weekend we’re introducing brand new Boar Spear skins in the store at 25% off.
The Boar Spear is the heaviest of the spears, and it deals the biggest damage of them all.
Due to its fine balancing, it also has a quick swing, which will benefit you on the battlefield, in the Arena or out in the wild on a hunt.
It’s easy to build starting from level 30 Weaponsmithing, and now you can decorate it to your liking at a special price! 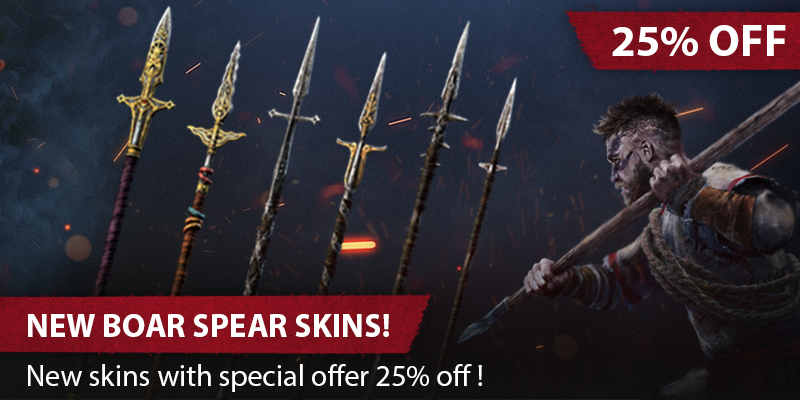 Speaking of hunting and more - this week the Treasure hunt event is in full swing, and we were blessed to see so many of you participating and exploring the vast map for these chests. If for some reason you haven't joined the fun yet - don’t waste another second, and stay tuned to our Discord for instructions and hints!
If you have any feedback on the Treasure Hunt event or suggestion about the future events, please message the LiF team about it!

wow pay real money to upkeep your stuff.. lol this game is done for when you had the thought of doing this...one with the most money spent on outposts wins.. lol
Top
Post a reply
2 posts • Page 1 of 1