Take heed, all thee who would join the Republic: 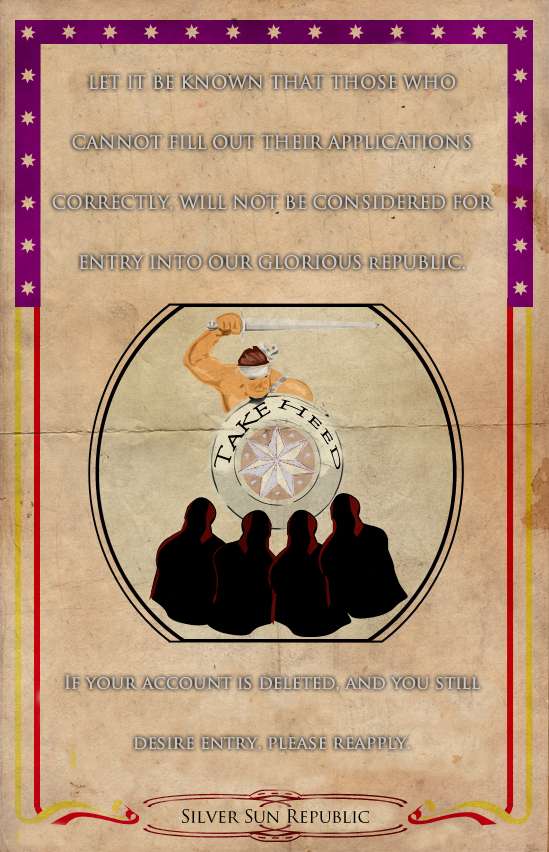 Named our new Bishop, named Radison, our Prime Minister as Governor of the Province while I'm away on campaign and Gunt as the Baron for the MG group.

Stianos was promoted to Herald.

Thanks to all who attended our event tonight!

Looking forward to the rest of our events!

Tomorrow is my wrap up day with anyone who needs anything from me before I head off for some RL PvP. Already looking forward to coming back to see what the Republic has accomplished in my time away.

Last night's tournament was a great success with Hawks once again taking the crown! Who will dethrone the reigning champion of the pit? Find out tonight by joining us for the Grand Melee!

To the bandits visiting our server, cheers! You have provided us much entertainment, in the form of the chase and your ultimate demise. More men are needed to provide this threat and counter it. Please apply! The Republic is growing by the day! com find your feudal home in the Silver Sun Republic! Will you swear allegiance to one of the prestigious great houses to get ahead quickly? Maybe you prefer the life of an independent citizen focusing on building your own prestige and influence through the ministries and private commerce? Think you have what it takes to compete in the arena battles to fight for glory and honor? Well there's only one way to find out! Come join us for some great RP and PvP action!

Now that all the frantic building has been done we're started to do more Rp events, should be a blast in the coming weeks.
Top

Meeting for military members of the Republic tomorrow night at 7pm EST. We'll be discussing on payment for the troops and how to earn your pay

We'll be going over drills, guard mounts and patrols during the next few days. Come join us even if you're not in the Republic and see how we're merging video game and real world tactics.

There is a reason we continue to have the largest private server in the game. We have ten people cooperating on building the city, while settlements in the south are being attacked by bandits (bandits are winning, lol). We are having a ton of fun tonight.
Last edited by Kalmorte on 09 Oct 2014, 12:29, edited 1 time in total.

Started doing some modding on the server looks like we'll be able to change things for the better here real soon!

Working on some videos to explain the structure, events and lore about the Republic.

The background and lore for the server are already posted, but we'll be doing some visual multimedia to explore more of what we're aiming for.

I have been with SSR for three weeks now, and its been great fun. Best guild I have ever been in. Good leadership, who listens to your concerns and is open to discussion. We have some big plans in motion, I really like where things are going, come be a part of it!
Top

I'm ready for you bandits

We're looking at rolling out a new system that will give members of the guild a real Feudal Life simulator.

The trick is to offer just the right amount of oppression while still offering a fun experience...join us, try it out, and give us your feedback!
Caelitus Mihi Vires
Top

Hey guys, I want to start off by saying I love everything I've been seeing as I explore y'alls webiste and read up on the guild. In fact I'm currently in the process of applying for membership in a separate tab as I write this! I do have a question out of curiosity though. What's the difference between House Medici and House McDougal?
Top

WarGerbil wrote:Hey guys, I want to start off by saying I love everything I've been seeing as I explore y'alls webiste and read up on the guild. In fact I'm currently in the process of applying for membership in a separate tab as I write this! I do have a question out of curiosity though. What's the difference between House Medici and House McDougal?

Not a whole lot at the moment. The Doge is the head of House Medici, and we're located at the northern part of the island...which is safer, at least safer from an invasion.

House McDougal's lands are located in the marchlands, which means it's a border territory. So they'll have to deal with attacks more frequently.

At least they will if we ever get someone on the server interested in some full-scale combat.
Caelitus Mihi Vires
Top

Azerath wrote:At least they will if we ever get someone on the server interested in some full-scale combat.

Which we invite any and all groups to come join the server for some combat!

The new arena is coming along great! It should be up in time for this weekend's tournaments giving us a great place to watch the fighters beat each other up!

We will be hosting a tournament this Saturday for everyone on the server to spectate or participate! Rules and prizes are posted on the SSR forums.

Some events happening these next few days!

For more information sign up on our forums and check the Guild events section of the forums.

Everyone on the server is invited to these events, you don't have to be SSR to play with us, but we would love to have you!

We have been around a long time: You should join this server!

It's extremely active and has a helpful and mature community.

I concur with Elysana, I have found nothing but a helpful and mature community in the SSR, and I am thoroughly enjoying my time spent there. It feels like I am making real progress, and developing not only in terms of skills but also as a player amidst other players who promote interdependence and that real community feel.

All in all I think it's a great server to try out, whether you're planning on playing a bandit or being a part of the SSR, I'd give it a go.