This week we’ve moved Buyan and Telmun to *nix servers, and are planning that next week the rest of the worlds are switched over. Also, on Thursday a small patch was released that addressed some issues and added some new stuff and optimized a couple of things. You can read the full patch notes here.

Speaking of optimization. Tomorrow we invite everyone to join a mass PvP stress test battle event that will take place on Avalon, server 24 at 18:00 UTC. Not only will it be a fascinating event where you can win valuable prizes, including gold, high tier horses, various weapons, and more, this will also be beneficial for testing reasons and making the game better altogether. Mark your calendars, and join the Grand Battle!

And now - to the main event! Almost one year ago on November 17 LiF:MMO OBT has started. This means that tomorrow we’re celebrating our first anniversary! We would like to thank all of you for being with us, playing the game, sending your suggestions and notes, supporting us from the early stages to this day, as we continue to improve and add something new to the game. Here’s an infographic to show what has been going on Abella throughout the year and what marks have you left: 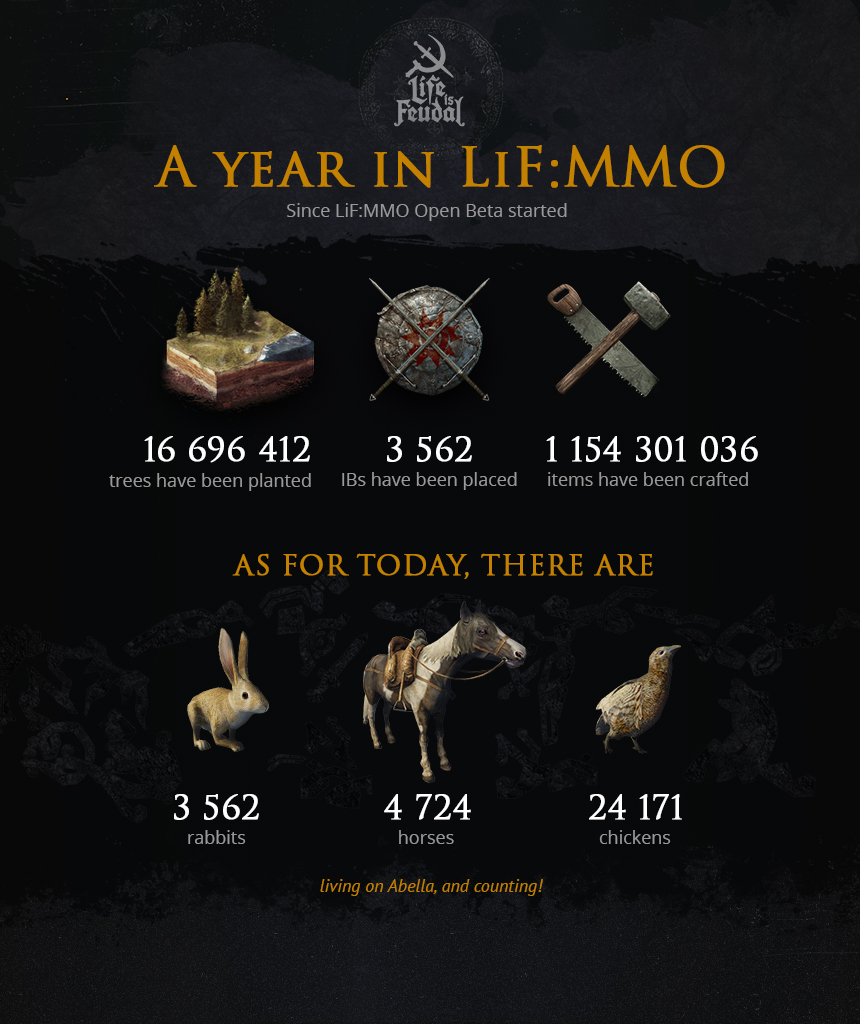 Also tomorrow we’re launching our Anniversary contest - A year in LiF:MMO: Showcase your Journey. Share your videos, photos, stories about how it all began for you, and what you’ve achieved now! We are looking forward to seeing how marvelous your villages and cities look now and also how they looked back then. The contest will last for a week, and there will be 3 winners. Stay tuned to our social media channels tomorrow, and don’t miss the announcement and the rules.

The last but not the least - this Friday we’ve launched an poll for Avalon concerning Prime Time duration. We’ve been getting a lot of requests to make it finish 1 hour earlier (and last 1 hour just like it used to before). If you agree (or disagree) we strongly encourage you to take part in it. We also apologize for the confusion of the initial question, and we have restarted the poll so that it is now clear to everyone.

Ouh? I had no idea that the Open Beta Test had not lasted a year.

It's a great achievement, most can not stand for a year

Keep up that great effort and dedication

I hope you reach the second anniversary

PS: See you between Bug and Bug, take care of stress hihihi