This week our team worked on two angles . Our development and game design team worked on several important tweaks and fixes that we are planning to share with you next week. We can reveal that some of them will be related to fixing annoying outpost totem issues. We also haven’t forgotten about solving the problem with sacrificing goods to Kallente that appeared recently. Secondly, this week we conducted a significant techworks on Godenland and Illa-Newydd. These maintenance works were focused on improving the game performance and making gameplay more smooth and comfortable for both new and veteran players. We have also fixed admin lands on Illa-Newydd world to save our Gravedigger from being dirt covered by the most enthusiastic newbies! In parallel, we are finalizing work on the Medic War Banner, so you may expect that it will be introduced with the next patches.

And now it’s time for a community spot!
We have summed up the results of the contest finals for the most creative recruiting announcement. We’re not gonna lie, it was a tough fight. The winner pulled ahead thanks to a few dozen votes. We present the voting results in the diagram below. 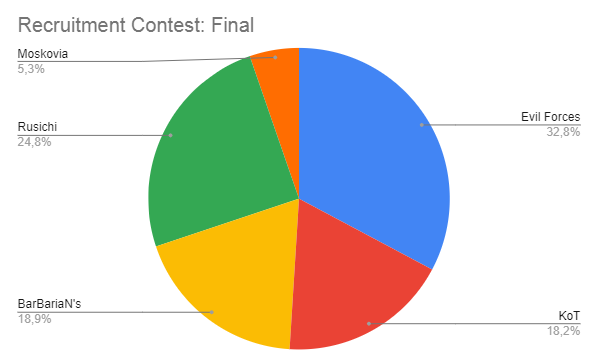 And ... ta-da! We are happy to announce that the Evil Forces Guild has been elected the winner of the contest with the most active, skillful and dexterous recruiter! We congratulate the winner and wish them to continue their success and acquire new active members of the guild. We ask all the other finalists not to be upset with such results. It was, literally, a close one for first place. The work was worthy, no less worthy prizes await you! The winner guild will receive a Sanctum of the Sleeper decorations pack, and other finalists will receive decorative Dummy on the horse packs! We wish the winners to enjoy decorating their castles.

That's all for now. Have a nice feudal weekend!